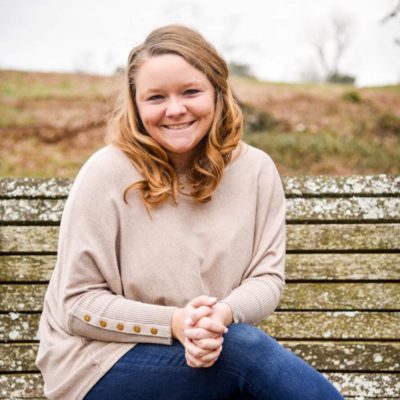 “Do not let any unwholesome talk come out of your mouths, but only what is helpful for building others up according to their needs.”
Ephesians 4:29

I had just finished playing my solo on the marimba during a marching band rehearsal in high school. “Sarah, that was so good,” my director remarked. “I’ve got to get those runs a little smoother,” I responded.

“Why can’t you just accept a compliment?” he asked. “Just say ‘thank you.’ It was good enough.”

“You never could or would be good enough to be their friend,” the MySpace message read in 2007. The words stung from a person I never expected. The friends they were referring to were people I considered some of my best friends. I was escaping middle school at the time, and I had no idea what that message had the power to do in my heart. I wasn’t good enough for my best friends? Did they think that? Why wasn’t I good enough? What had they said about me? The questions flooded my brain as my eyes welled with tears.

Just drama, you might say. Everyone goes through it. I know that’s what you’re thinking because that’s what I thought, too. But thirteen years later, I’ve discovered that those words in that message put a lie in my head that I started believing: I could never and would never be good enough for anyone. If my best friends actually did feel that way, then had they been pretending all this time that they loved me? Who else was pretending?

Fourteen years ago, Ephesians 4:29 was my favorite scripture. I was surrounded by a family, a church family, and friends that loved me. I lived through middle school drama – somehow -, and I came out with a few scars. However, those frenemies never pretended to love me; they just plain didn’t love me. Aside from them, I was loved really well, and I was blessed to feel empowered, validated, and confident.

But thirteen years ago, someone told me that who I was or who I would become wasn’t good enough. They essentially told me that the people I loved were pretending to love me back. I wasn’t worthy of being loved by them.

It’s crazy that a human being would put another human being down like that. It’s crazier that I believed it. But even crazier? On the other side of it, I don’t even think those friends have any idea this happened. They certainly have no idea how much it hurt me.

See, we do this thing with our mouths with which we speak before we think. It’s not just the middle school drama; adults are just as guilty: “You went to college + put some meat on those bones, didn’t you?” “You’re not empathetic enough.” “You’re too young to even understand this.”

+ with one sentence, we have destroyed someone else’s beliefs, confidence, and potential. We’ve engraved something in their mind that they don’t easily forget. + I think it’s time to make something clear: There is a difference between saying hard truths + speaking harsh words.

Hard truths are spoken in love, with gentleness but boldness. They are spoken by a trusted individual to another individual. They are spoken with one purpose: to help someone improve to be the best possible version of themselves. They empower. They strengthen. They take the hand of a friend and say, “This might be challenging, but I’ll walk with you.”

Harsh words are used to prove a point, to knock someone down, + often just to make conversation…oddly enough. They help no one; they only hurt. The tiniest prick could last for years. + true or not, they are not spoken in love; therefore, they are not glorifying of the One that gives us breath to speak. With some modifications, gentleness, love and wisdom, harsh words can become hard truths. But harsh words as they are kick people in the gut + leave them to figure out how to heal on their own.

+ so 13 years later, I’m an adult. I get knocked down by harsh words all the time. “Grow a thick skin,” they tell me. I’m trying, I’m trying. But, it took a lot of anger, a hardened heart, + a lot of bitterness for me to realize that I have a lot of people that love me the way Christ does; I just don’t believe them. The whispers in my head remind me I’m not good enough, I’m not worthy, and they’re just pretending.

I get the power to speak hard truths to those that trust me. But, I also get to empower others to overcome the harsh words someone has made them believe. That’s what 4:29 talks about, I get to build others up according to their needs. So do you; you get to do that, too. We all do.

I’ve finally seen that 2007 message for exactly what it is – just harsh words, not hard truths.